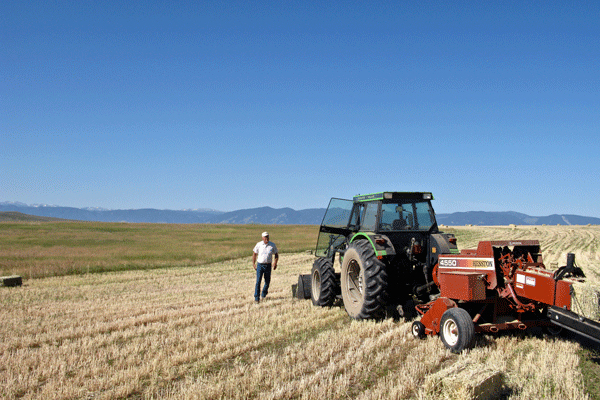 “Although our ranch is small by Wyoming standards, we have been fortunate to share it with an amazing variety of wildlife and native plants. Sometimes being rich has nothing to do with money. We’re rich because of the biodiversity and productivity of our small corner of the planet along the Tongue River in Sheridan County. We want to do what little we can to ensure that it continues in the future. We hope we are only two of many landowners who will choose to preserve the Tongue River Valley through conservation easements similar to the one we are executing today,” said landowners John and Vanessa Buyok the day the easement with SCLT on their 844-acre property closed.

When you visit the Buyok Ranch, you can’t help but understand the landowners’ feelings about this special property. Located about 7 miles north of Sheridan City Limits near the historic coal-mining town of Monarch, Wyoming along the Tongue River, the ranch boasts spectacular 180-degree views of the Bighorn Mountains to the west and while it is a working cattle ranch, it is also home to an abundant variety of plants and wildlife. The Buyoks wanted to know that the ranch would never be subdivided or developed and would remain as important wildlife habitat and used for agriculture forever. They donated the full value of the easement to SCLT who is responsible for ensuring that future property owners uphold the terms of the easement.

The elevated portions of the property are covered with grasses and sagebrush where you often see pronghorn, coyote, rabbits, marmots, foxes, and both mule deer and white-tail deer. Along the Tongue River on the lower portions of the property chokecherry, wild plum, wild rose, and snowberry shrubs dominate the drainages while willows, cottonwoods, and dogwoods make up the tree canopy. Here, snapping turtle, tiger salamander, blue racer, rattlesnake, spiny softshell turtle, painted turtle, the leopard and chorus frog, and many other amphibians and reptiles can be spotted. The Buyoks have also spotted and seen signs of black bear, moose, mountain lion, wolverine elk, wolves, and bobcats on the ranch.

Aside from the ranch’s abundant plants and wildlife, it also has a rich history. Based on its location along the Tongue River and placement within the larger Powder River Basin, as well as artifacts found on the property, it is thought to have been important land for Native Americans. The Sheridan Wyoming Coal Company owned and mined underneath the property in the surrounding from 1902 – 1953 and John Buyok’s uncle began purchasing land parcels in 1946 as the coal company began to mine-out the area and sell its land holdings. His uncle finished purchasing the current ranch in 1953 with the closing of the coal mine. John and Vanessa began purchasing portions of the property in 1990 and finished assembling the total acreage in 2006.