At long last, ‘The Impaler’ meets its match 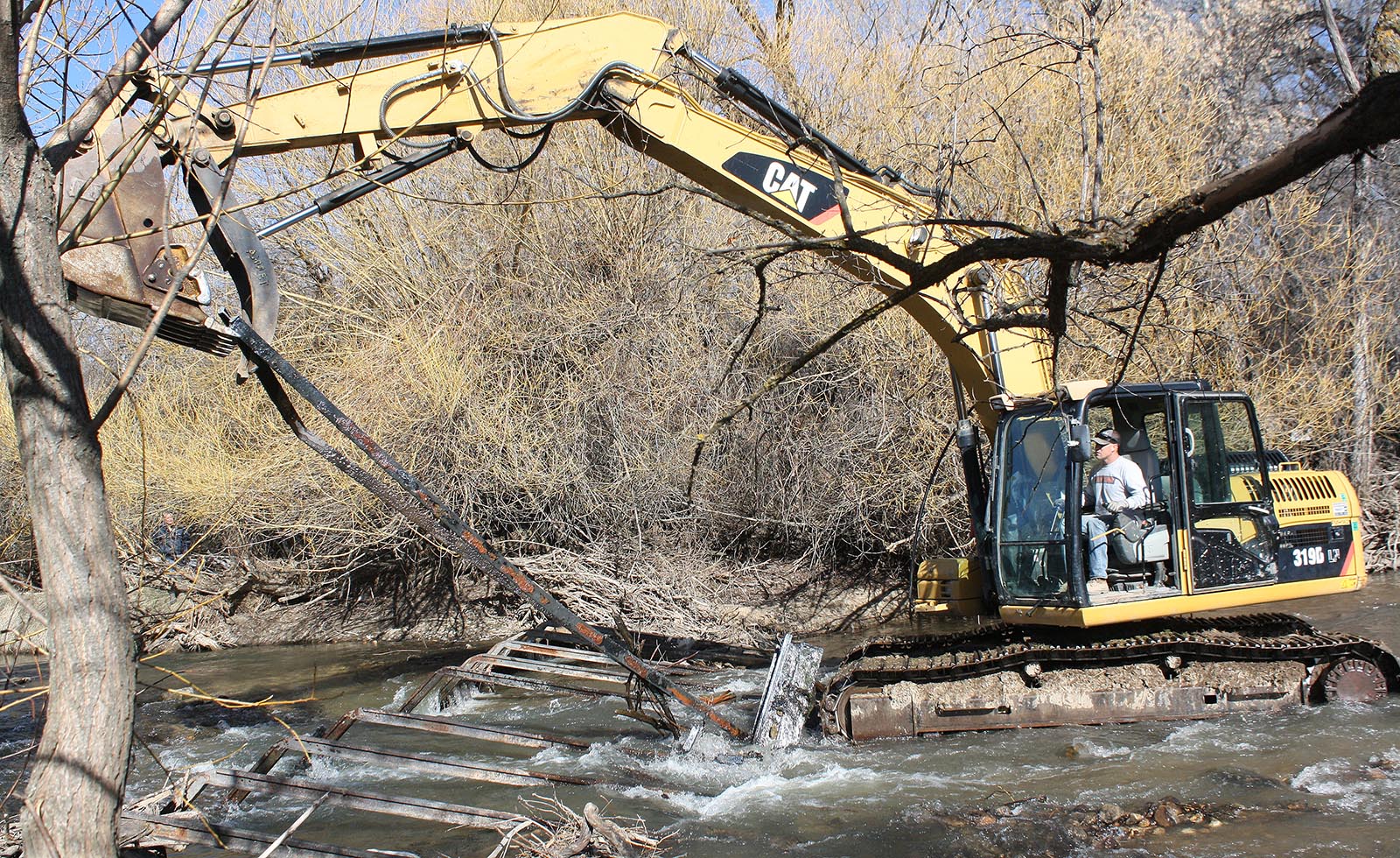 Kenny Osborne of EMIT removes the first piece of rail from “The Impaler,” an old diversion structure made from railroad iron and ties in Big Goose Creek on Sheridan’s west edge during a workday this spring. SCLT helped organize a project with local landowners who worked together to remove the structure which had long been a dangerous place for water recreationists. EMIT and Steady Stream Hydrology donated equipment, expertise, and volunteer muscles to ensure the removal went off without a hitch.

Teamwork on the ground makes getting on the water safer

Creaks, clangs, slaps, smacks and a big whoosh filled the air along the banks of Big Goose Creek this spring. For most of a morning, Kenny Osborne, with the help of his mighty excavator, methodically freed iron rail after iron rail from the creek. Finally, after nearly 90 years, “The Impaler” – an old diversion structure that once sent water for the railroad all the way to Sheridan’s historic downtown – met its match.

The removal of this dangerous stream obstruction was made possible thanks to a whole lot of teamwork from landowners and residents at the site and two local businesses – EMIT and Steady Stream Hydrology – that donated equipment, expertise and volunteer muscle to ensure water recreationists have safer access to the stream.

Prior to removal, Richard and Kathy Woods allowed a portage site on their land so recreationists had a safe way around the dam. They, too, supported efforts to remove the dangerous “Impaler.” As a bonus, removal of the dam will improve stream health and likely reduce the impact from flooding when the waters rise.

“My grandchildren play in it. We enjoy the waterfowl and wildlife.” Casey Osborn, Sr., an upstream landowner, relayed. As he spoke, a nesting mother goose watched the proceedings from a small island just upstream.

“For a long time, it had been accepted to dump a lot of things in the stream. Now, we’re cleaning it up,” he added.

With each rail removed, Casey and a cadre of other helpers were quick to hop in the water and load debris in the excavator’s bucket. Raleigh Whalen, another landowner, said he’s eager to see what fish swim in.

Removing “The Impaler” was the definition of true teamwork. Raleigh Whalen (left), a landowner at the site and Casey Osborn, Sr., (center), an upstream landowner, were among several volunteers ensuring the dam removal was done efficiently. All the while, Tina Krueger (right), owner and principal hydrologist at Steady Stream Hydrology, made sure the project was done with the stream’s health in mind before, during and after the removal was complete. Thanks to their efforts, Big Goose Creek is a much safer place for everyone who wishes to enjoy a fun day floating or paddling the stream.

That’s something Tina Krueger, owner and principal hydrologist at Steady Stream Hydrology, said should happen as the stream begins to heal itself. She worked with SCLT to prepare permits, collect data, and oversee the project before, during and after removal.

She explained that the channel will soon begin to return to a more natural state – narrower, deeper – from its wide, shallow condition caused by nearly a century of impoundment. “That will make the stream deeper and cooler which will let it support the life it can support.”

That will likely mean more trout for Raleigh and a nice cool pool for his dogs and Casey’s grandkids to swim.

In late summer, Tina joined SCLT to check in on the site. She was quite pleased with the progress, saying that the stream looked in very good shape thus far. Some vegetative and shaping work may be needed in the spring, but, in the big picture, the stream’s healing itself.

“Clean up efforts like this enhance our outdoor resources in Sheridan County. Ecologically, it creates a more sustainable habitat for all riparian and terrestrial life,” she concluded.

And that’s what projects like this are all about. Thanks to everyone’s efforts, the Tongue River Water Trail now has two, rather than three, portages to go with 14 access sites thanks to partnerships with public and private land owners.